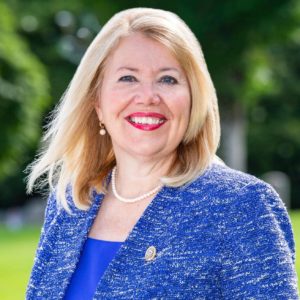 Congresswoman Lesko has a BBA from University of Wisconsin at Madison

Something probably none of knew about our Congresswoman – she is a former Hearing Officer of North Valley Justice Court; as well as received 3 different awards here in Arizona.
As a Christian she is definitely Pro-Life; she is very strong on not having any income tax increase in order to balance the budget, or reduce our defense spending in order to balance the budget.  She is strong on our Constitution supporting freedom of expression granted by the 1st Amendment and does not support regulation of indirect campaign contributions from corporations and unions; a srong supporter of our 2nd Amendment in that you does not support gun-control legislation. She is in favor of repealing the 2010 Affordable Care Act (Obamacare); Supports building the Wall along the Mexican border; supports using military force in order to prevent governments hostile to our Country from possessing a nuclear weapon.  All in all Congresswoman Debbie Lesko supports keeping our nation safe by rebuilding our military, securing our border and creating a strong economy.

https://chamberbusinessnews.com/2018/09/06/get-to-know-congresswoman-debbie-lesko/
A very good interview worth reading and/or watching on Congresswoman Lesko’s new role as Congresswoman.

The Congresswoman does have a prior committment that may have her showing up late to the meeting.  Be assured however, Congresswoman Lesko will be there.  I rec’d an email from Debbie saying she is looking forward to coming.